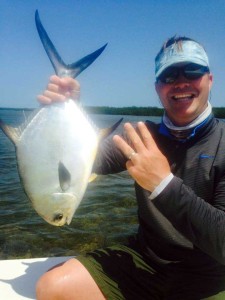 Dr. Greg Smith with one of three permit caught on the final day of the 2014 March Merkin

Smith credited the win in great part to Collins’ ability to find the fish.

“Scott taught me how to permit fish, and I’ve been fishing with him a lot,” Smith said. “We can’t catch them if we can’t find them, and (then) it’s a matter of getting in front of fish and making them eat.”

“When the opportunity comes up, he’s able to take advantage of it better than anybody,” said Collins of his angler, adding that Smith “can see really well and cast really well and feed the fish.”

Twenty-seven permit enthusiasts fished the tournament, coming from as far away as California, Montana, Wyoming, Washington, New York and Maine to participate.

Proceeds from the tournament benefit the Bonefish & Tarpon Trust, which helps conserve and enhance global fisheries and habitats of bonefish, tarpon and permit.

For more information about being a March Merkin sponsor, please contact us at info@marchmerkin.com